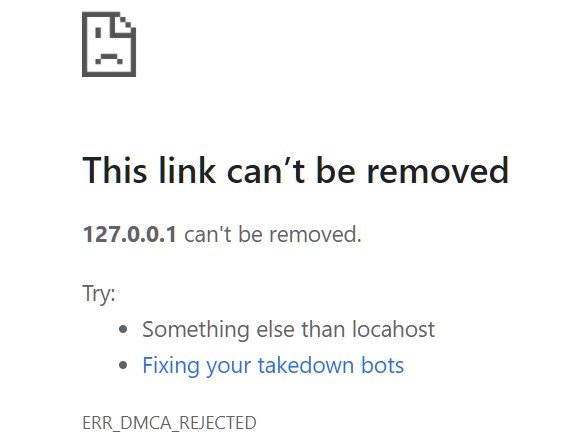 
Ukrainian TV channel TRK has sent a rather bizarre takedown request to Google. The company’s anti-piracy partner Vindex asked the search engine to remove a search result that points to 127.0.0.1. Tech-savvy people will immediately recognize that the anti-piracy company apparently found copyright-infringing content on its own server. 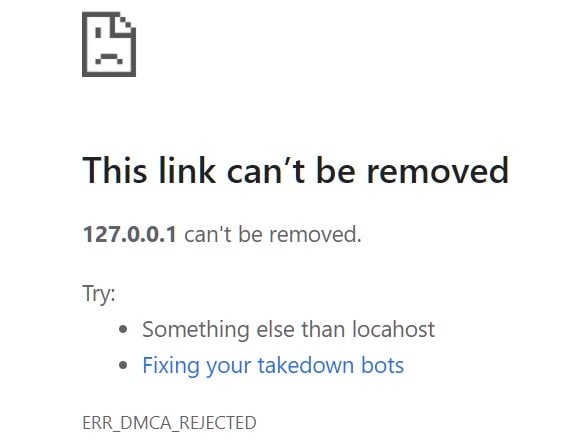 The fact that “infringing sites” show up in search results has become a source of frustration. As a result, Google and other search engines are facing a steady stream of DMCA takedown notices.

Google alone has processed more than five billion takedown requests and millions of new URLs are reported every week. While the majority of these correctly point to problematic links, there are plenty of mistakes too.

Some copyright holders flag perfectly legitimate websites as piracy havens, which others shoot themselves in the foot by targeting their own websites. The latter happened to the webtoon subscription service Toomics just recently.

This week we saw yet another problematic DMCA notice, which is perhaps even worse. TV channel TRK Ukraine asked Google to remove content hosted on the IP-address 127.0.0.1, which is the localhost of a device or server.

The request was sent by TKR’s anti-piracy partner Vindex, which essentially flagged a file on its own machine. The ‘infringing’ link is 127.0.0.1:6878/ace/manifest.m3u. This points to a playlist file, possibly for the P2P streaming platform Ace Stream that’s often used to pirate content.

According to the takedown notice, all reported links “illegally provide external links with which users can access and/or download unauthorized copyrighted contents of Football.” That would then include the file on Vindex’s computer.

Since 127.0.0.1 refers to the host computer, Google is technically asked to remove a file from its servers. A file that doesn’t exist. Needless to say, Google hasn’t taken any action in response.

The above suggests that Vindex may want to take a good look at its takedown bots. The company doesn’t have a stellar reputation when it comes to DMCA notices. Of all the links that were reported to Google, little more than 10% were removed by the search engine.