Anti-piracy coalition ACE is continuing its crackdown on pirate sites. Represented by the MPA, the group obtained a DMCA subpoena that requires the .to domain registry to hand over personal details relating to the operators of Cinecalidad, Myflixer, Streamplay, and several others. The question remains, how effective is this strategy?

Over the past year, the Alliance for Creativity and Entertainment (ACE) added a new tool to its anti-piracy toolbox.

These subpoenas are relatively easy to obtain. They are not reviewed by a judge but are signed off by a court clerk. This makes it a pretty straightforward process that’s not very costly either.

ACE’s enforcement campaign is led by the MPA and their subpoenas are mostly targeted at two service providers. The first is CDN provider Cloudflare, and the second is Tonic Domains Corp, which is the registry for .to domain names. 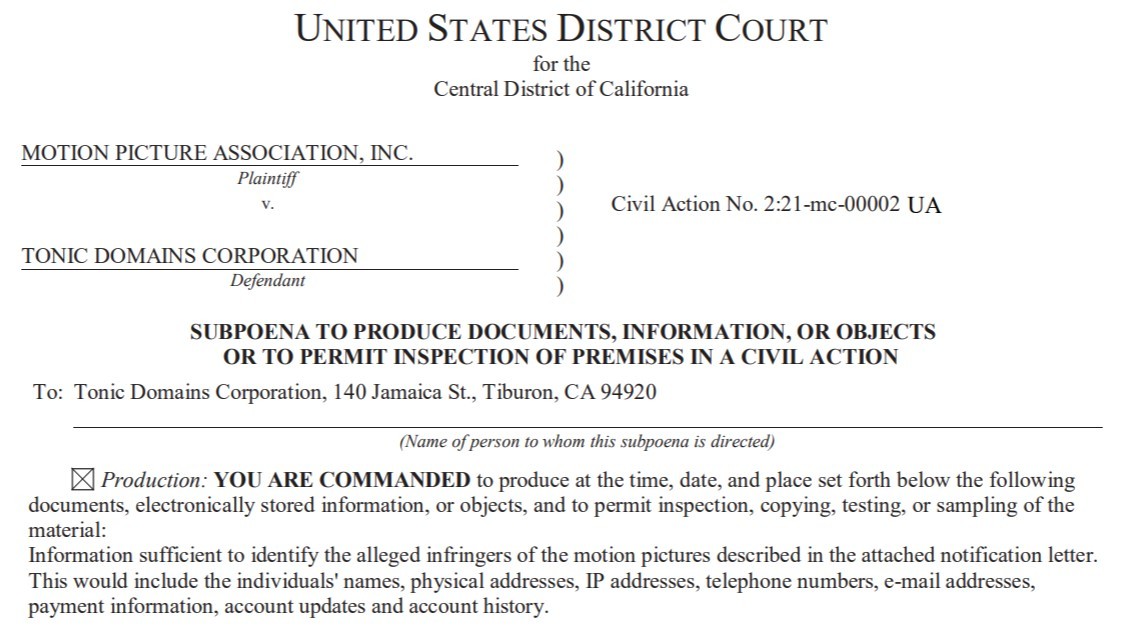 While .to is the top-level domain of the island kingdom of Tonga, the Tonic registry operates through Tonic Domains Corp., which has a U.S. presence and a California address. As such, it falls under the jurisdiction of US courts.

This means that Tonic Domains Corp will likely hand over the requested info. However, it’s unclear how effective this will be. If we look at some of the earlier subpoenas obtained by the MPA and ACE, the results are mixed.

For example, last October the anti-piracy coalition obtained a subpoena to uncover the operators of the streaming giant s.to. Despite this effort, the site continues to operate as usual from the same domain name.

In some cases, site operators have decided to move to a new domain name, likely as a precaution. That is also the case with Cinecalidad.

Finally, there are some sites that simply ‘disappeared’. While it’s hard to be sure that ACE’s enforcement efforts are tied to this, it certainly played a role in some cases, including the shutdown of Ololo.to a few weeks ago.

The effectiveness of the subpoenas mostly depends on how actionable the information obtained from the Tonic registry proves to be. Many site owners will take measures to protect their identities, which makes it possible for them to continue business as usual. Those who don’t are in trouble.